Home » Latest Industry News » Budget 2016: What this means for you

In delivering his third Budget in 12 months, you might think George Osborne had little left to change that would affect your finances. You’d be wrong.

Following Budgets last March and July, and the Autumn Statement in November, the chancellor was back on his feet announcing major plans.

Tax and savings were central to Mr Osborne’s 62-minute speech.

So what are these proposals, and how will your finances be affected?

What was the standout announcement affecting people’s finances?

If you are aged under 39 now, the major plan was the introduction of what the chancellor is calling a “Lifetime Isa”.

An Isa, or Individual Savings Account, is a tax-free wrapper around savings. In other words, the money is not taxed when it is taken out of the account. Isas already exist in various forms.

Under the new plan, those under 40 in April 2017 will be able to save up to £4,000 each year into the Lifetime Isa, and receive a 25% contribution from the government each year. So for every £4 you save, the government will add an extra £1. This top-up will last until savers are 50. The Isa can be put into any mixture of investment.

There will be conditions on how this is spent. Lifetime Isa account holders will be able to access all the funds, including the government top-up, tax-free to buy a first home of up to £450,000, if they have a terminal ill-health condition, or from the age of 60. There will be quite large penalties if savers dip in to these funds at other times.

It is essentially a choice for the under 40s of whether to save for a house or a pension (it does not, of course, make property any more affordable) and seems to have been introduced instead of wholesale changes to the pension system.

It also means that, for many young people, there will be a calculation to make on whether they want to save in this kind of Isa, with a government top-up, or stick with a traditional pension, with an employer top-up, or both.

What does the Budget mean for the tax I pay? 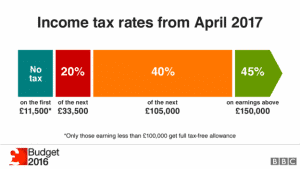 The amount of income people can earn before they start paying income tax – known as the personal allowance – is rising.

Accountants say this 2017 change will reduce tax by £180 per year, or £3.46 per week, for basic rate taxpayers compared with the current £10,600 personal allowance.

Is any day-to-day spending likely to rise?

A sugar levy was announced by the chancellor that may change the sugar content of fizzy drinks.

However, the chancellor admitted that it could add to the cost to consumers of fizzy drinks.

This new levy will begin in two years.

How does this budget affect taxes on alcohol and tobacco?

Beer and Cider duty is to be frozen again. Duty on whisky and other spirits has also been frozen.

Duties on wine and other alcohol will rise in line with inflation.

Excise duties on tobacco will rise by 2% above inflation.

What happens to the cost of driving?

Fuel Duty will be frozen again.

However, a tax increase which will hit motorists and others is the rise in Insurance Premium Tax.

This was last raised from 6% of an insurance premium to 9.5% in November – a move that the Association of British Insurers (ABI) says added nearly £13 to the average comprehensive motor insurance policy.

Now Mr Osborne has announced that this will rise again, to 10%.

This will not only add to the cost of motor insurance but also other forms of insurance such as healthcare insurance costs, home insurance, and pet insurance. Life insurance is exempt.

The money raised by the half a percentage point increase will all be spent on flood defences, the chancellor said.

Mr Osborne also announced that the cost of crossing the Severn Bridge will be halved by 2018. It currently costs £6.60 to drive a car over the bridge.

What does this Budget mean for the property market?

Some have already suggested that the new Lifetime Isa will add to demand of property in the longer term, as people save, with government help, for a loan.

In the more immediate future, investors with more than 15 properties will not escape the 3% stamp duty surcharge being faced by other landlords.

What do we already know?

A number of major changes affecting your finances have been announced in previous Budgets and Autumn Statements by the chancellor.

Ongoing changes to welfare payments for people with disabilities will save the chancellor a significant amount of money, adding to criticism from campaigners about the changes.

They include a radical change to the way their savings are taxed from 6 April, a 3% stamp duty surcharge on buy-to-let properties and second homes from 1 April, and a new system for the state pension for new pensioners from 6 April.

The government also announced a Help to Save scheme for lower-income individuals.

PrevHow to find the best mortgage
Despite tough new rules, the self-employed are getting mortgagesNext